(I may earn a small commission from the products mentioned in this post.)

In this article I will share with you what I had to eat during my short stay in the hospital.

I was a bit surprised because most of my hospital meals consisted of liquid diets and I was never told to expect a liquid diet. After not eating after dinner the night before, skipping breakfast and my morning cup of coffee I was hungry when I woke up in the recovery room at lunchtime.

In the recovery room I was hooked up to an IV. There, I was offered only water. I was very thirsty so I drank quite a bit. Soon after I was wheeled into my room where I was offered my first chance to eat.

My 1st Snack After TKR Surgery

Even though I was a bit groggy, I was hungry after the surgery. The surgery took place at 10:00 am and I arrived in my room at approximately 2:00 pm. Once I was settled the nurse asked me if I would like something to eat.

I said yes, and soon a small container of red gelatin arrived. I don’t eat Jell-o or gelatin often but it sure tasted good that afternoon. I scarfed it down. I was advised to drink plenty of water and that I would not be getting any more food until 5:00 pm when dinner would be delivered. 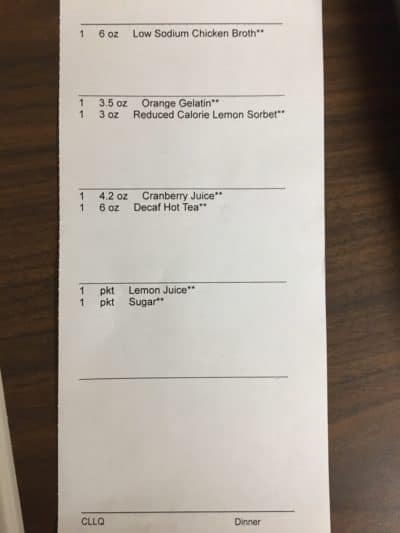 This meal arrived at 5:00 pm roughly 7 hours after my surgery began. I was hungry and ate/drank everything on my tray.

I was able to taste everything. At this time I was on pain medication and still had my IV dripping. I still had my drainage tube from my knee dripping in a bag as well.

None of these things seemed to affect my appetite. I would have enjoyed a cracker or a piece of toast, something to chew on. I did not have an upset stomach and I did not feel nauseous after eating.

My 2nd Meal After TKR

I didn’t have my next meal until the next morning.  Breakfast arrived at 7:30 am. By then, I had my IV and drainage tubes disconnected and I was asked if I would like to use the walker and sit in a chair to eat.

I was hungry and anxious to get out of the bed. I used the walker to go to the bathroom and then returned to a chair next to my bed to eat breakfast. Due to the pain medication my knee gave me no pain and I was ready to eat. 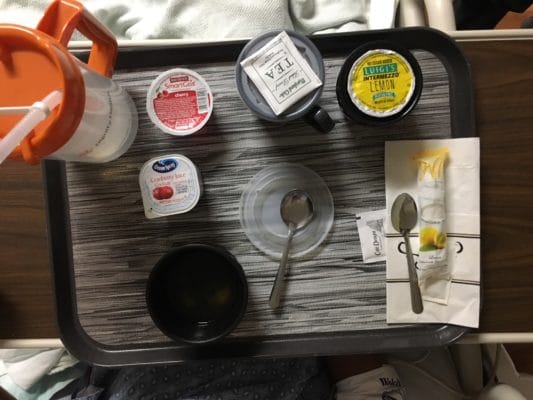 I was given an “ADVANCED LIQUID DIET”

Again, I ate and drank everything on my tray except the milk. I did use the milk for the cream of wheat but I did not drink the remainder in the carton.

Everything tasted fine and the food did not leave me hungry. My wife who was visiting was even allowed to get me a second cup of coffee.

After this meal my stomach was fine and I was not nauseous. I was able to walk the hall afterwards with my walker and I also took the “stair climbing” test right after eating.

My 3rd Meal After TKR (lunch)

After a physical therapy session, the nurse and I settled on a pain medication to take at home. Prior to this decision I had intravenous and oral (pill) pain medicine.

We decided on Percocet. She gave me a pill. Soon afterwards, I was nauseous for the first time. I continued to feel that way while I signed the discharge papers and made arrangements for home physical therapy.

I was told that I would receive one more meal before discharge at noon. This was going to be a regular meal without limitations. Needless to say, I was not hungry and I did not feel well.

The meal that was delivered consisted of:

I was excited about eating solid food earlier. Now, I did not have much of an appetite. I ate the mashed potatoes with some of the gravy from the meat and picked at the green beans.

I drank the juice. I did not eat any of the pork chop or gelatin and I did not drink the coffee.

After lunch, the nurse gave me the name of an over the counter medicine that would curb the nausea that the pain medication might cause. It was called meclizine.

I drank a lot of water that first night. The downside was that I also urinated a lot the first night. I was always thirsty so I didn’t mind urinating frequently.

Thoughts and Tips for Food After TKR Surgery

For the most part I was pleased with the food that I was given during my stay in the hospital. The portions and the variety on my tray did not leave me hungry.

I really enjoyed the cup of coffee that first morning and my serving of cream of wheat that I tried to chew. I did miss solid food but I was satisfied with the food I was given.

I had never thought of bringing any food from home. Since I was on the liquid diet for meal one and two, I doubt that I would have been allowed to eat anything brought from home.

It may be a good idea to ask at your pre op appointment what you will be eating in the hospital and if you can supplement it with food from home. I didn’t think to ask so my diet was a surprise.

I felt as strong generally (except my right leg) when I left the hospital as when I entered. I did not lose any significant weight. I weighed in at 177 pounds and left weighing 176 pounds. I could have gained some weight with the implants?

I found it a small hassle to urinate frequently but my team encouraged me to both drink and urinate, both were positive signs after surgery. My team also let me know having a bowel movement as soon as possible was important also so I tried to eat everything on my tray to help speed up that process.

I was very satisfied with the food that I was given during my hospital stay. I did not expect an initial liquid diet but I was given plenty to eat and I had a variety of food selections at each meal.

I had no problem eating and no after effects until my last solid meal. I was told what to buy at my local pharmacy for any future nausea.

Even though I was always thirsty, I would encourage you to drink as much water as possible. I would also encourage you to eat as much as you possibly can, as this is a sign to your care team that you are doing well.

At your pre op hospital appointment ask about the food so that you know what to expect. I was always encouraged to ask questions. I was told I could resume a regular diet when I returned home and I looked forward to eating my favorite foods.