(I may earn a small commission from the products mentioned in this post.)

Range of motion will be a term you hear time and time again in the days and weeks following TKR surgery.  This article shares my range of motion progress after total knee replacement surgery as well as my timeline and range of motion goals.

As I’ve explained in earlier articles my TKR was a result of sports injuries suffered 40 plus years ago.

Because of the prior injuries I never regained optimal range of motion in my right knee.  This was partly due to having a full cast up to my thigh for 7 months after a broken leg and 2 meniscus surgeries that resulted in a soft cast for 6 weeks each.

Even after physical therapy for my past injuries the best range of motion I could achieve was 125 degrees.

As time passed after those surgeries I was walking with bone on bone on my right knee. Also, my knee always seemed to build up  fluid which further decreased my range of motion.

My flexion and my ability to extend my leg straight decreased.

After my recent TKR surgery I was pleased with the progress I made in regards to my range of motion. I must emphasize that progress came with a lot of hard work and perseverance (before and after surgery).

The first two weeks after surgery were crucial and there were many times during those two weeks that I wanted to cheat on workouts or just give up. I’m glad I decided to tough it out because the improvement I gained in my range of motion was worth it.

My Knee Range of Motion Before Knee Replacement

Before my surgery, my range of motion was not great. My flexion was about 120 degrees and I was minus 7 degrees when trying to straighten out my knee (could not straighten flat).

My surgeon assured me that both of those numbers would improve after surgery. After surgery, I was hoping to be able to completely straighten out my leg and to improve my flexion to 130 degrees. The doctor told me that this was a reasonable expectation.

Right After Knee Replacement and Range of Motion

When I arrived in my hospital room one of the first things that I noticed was how swollen my leg was. The knee was huge but so was my thigh and ankle.

Because of the swelling, I had very little flexion but I could straighten my leg. During the in-hospital therapy sessions the therapists were mostly concerned about getting me on my feet, walking with a walker, and taking the stair test.

They never measured any range of motion during my stay in the hospital. When the doctor arrived the morning after surgery he did mention that after the surgery they saw a gain of 7 degrees when straightening my knee. That was a pleasant surprise.

During my first in-home therapy session (3 days post-surgery) the therapist did measure both my flexion and my ability to straighten my knee. I did all of her assigned workouts first including intense flexion exercises that encouraged me to flex and straighten my knee.

During the last exercise she measured my flexion at 70 degrees and I was able to straighten my leg completely to 0 degrees. The flexion measurement was taken during exercise and with pain (8 to 9 on the 10 point scale).

The straight leg measurement was also taken during exercise but there was little if any pain during that measurement.

Week 1 Progress with Range of Motion

During the first week after surgery, I was able to make progress. The intense swelling made exercise and flexion difficult but as the swelling decreased the knee was easier to bend.

After my second home therapy session (6 days post-surgery) my therapist measured improvement in flexion from 70 degrees to 88 degrees. Before the surgery, my leg had begun to bow.

During the surgery the surgeon took the bow out and straightened my leg when he inserted the implant. My tendons and muscles had to react to the realignment and it probably stretched them more than they had been stretched for several years.

During the week, the swelling continued to decrease. With reduced swelling and three very intense workouts a day my range of motion continued to improve. 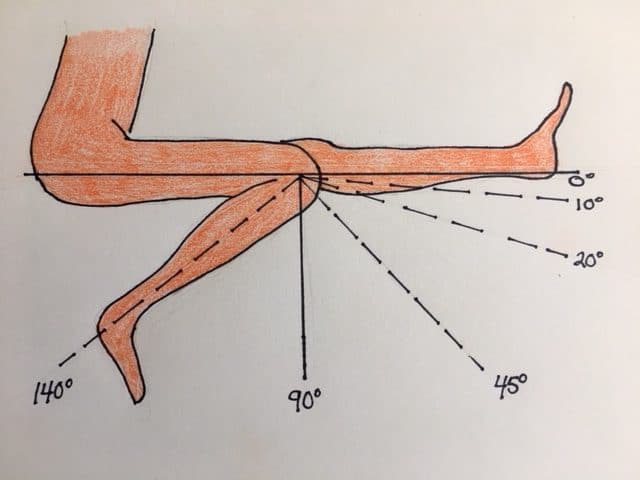 During the 3rd session (day 9 after surgery) my therapist added another set of 5 standing exercises to go along with the 5 that I was already doing on my bed. She complimented me about my ability to do the exercise and was impressed with the progress I was making and she made note of the reduction in swelling.

At the end of the session, she measured my flexion at 95 degrees. The exercises and the measurements were both painful. The results were worth the pain.

The two exercises that hurt the most but that did the most good were: the ankle slides on the bed using a robe rope to pull the foot as far as I could towards my butt and the foot slides sitting on a chair (with arms) sliding my foot in a plastic bag on a tile floor as far back to the chair as possible.

During the second-week post-surgery I continued to make progress with my flexion. The pain did not decrease during the workouts but the results motivated me to continue the workouts when I felt like cheating or skipping one.

I began workouts on the exercise bike (5 minutes at level 2) and seated leg presses with no weight. I also began doing leg lifts with a 3lb weight. The therapist took measurements of both thighs and both knees.

To finish day 1 he gave me a massage around the knee for 10 minutes and then he had me do 20 ankle slides on the table (laying on my back and sliding my foot toward my butt). At the end of the ankle slides, he measured my flexion at 113 degrees and my straight leg at 0 degrees.

Knee Replacement After One Month: Range Of Motion

I’m currently going to physical therapy 3 times a week and working out at home (as well as going to a gym) on my off days.  I’m able to ride a stationary bike, albeit slowly, take walks a mile long, and do leg strengthening workouts (check out my suggestion for best stationary bike after knee replacement).

Because the swelling has decreased I feel it’s helped with my ability to bend my knee.  Also, my muscles and ligaments are continually being exercised and stretched – I would not be doing as well if I wasn’t active.

On my 4th visit to the offsite therapy (day 27 post-surgery) my therapist measured my flexion at 115 degrees. He was pleased and told me I was doing better than the average patient and to keep up the hard work.

The exercise is meant to provide multiple benefits:

Some exercises will get your blood pumping, while others will be painful.  Bending your leg is so important but it won’t feel good when there’s still swelling.  Push through with the tips below:

Comparing yourself to others is a challenge because everyone has a different reason for knee replacement and everyone is in a different physical condition.  It also depends on the age of the person.

My general thought would be that initial flexion will likely be between 60-80 degrees and you should aim for 120-130 degrees of flexion within 2 months of surgery.  This won’t be easy so it will take a lot of effort and determination.

I still have a long way to go. I’m ahead of schedule but I’ll continue to work to get as much range of motion as possible.

Knee Replacement Range of Motion: My Timeline and Goals

As you’ve read, I improved a lot in my first month after knee replacement surgery.  This wouldn’t have happened if I would have slacked off or not followed the therapy.

Even when I didn’t have my physical therapy sessions, I was doing them on my own 3 times per day.  I had heard about scar tissue building up after surgery and making the joint less flexible.

I’ve already achieved straightening my leg so my goal for flexion is currently 130 degrees.  If I reach my goal I’ll push to gain more flexion in the knee.

Flexion isn’t my only goal, I’ve also created goals for therapy and exercise.  I’m riding on the bike more, walking more, and trying to stretch my leg muscles multiple times per day.

I know strength plus flexibility will result in an additional amount of flexion.

For me, it was the hard work before and after surgery that helped to improve my recovery and increase my range of motion after TKR. I would encourage you to exercise regularly at least 2 months before your surgery.

Concentrate on strengthening the muscles around your surgical knee. Bike riding and swimming were the exercises of choice for me.

The bone on bone in my knee did not allow me to hit the gym and use conventional leg machines. After surgery, follow your therapist’s plan.

Progress comes with pain. After the first month, you will look back and be glad you gave your best effort. You will have come along way and the work will be worth the result.

21 thoughts on “Knee Replacement Range of Motion (Timeline and Goals)”