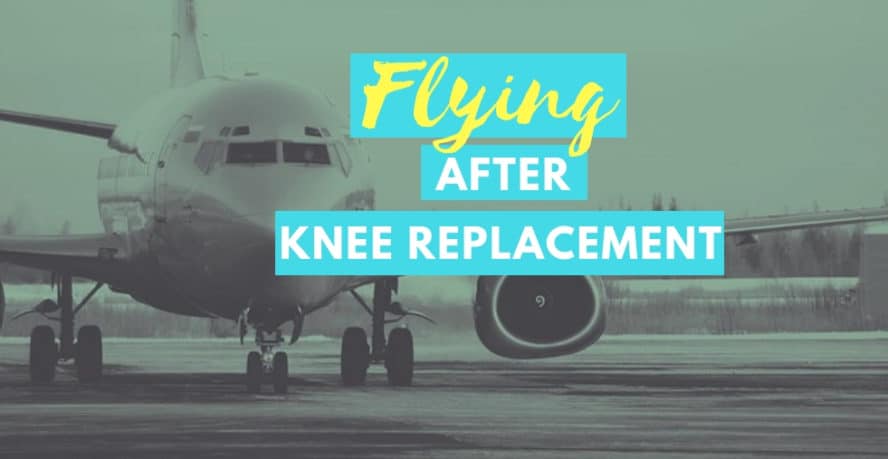 After knee replacement surgery you’ll be struggling to move around.  Don’t worry, if everything goes well you’ll recover quickly and although it may seem like time is moving slowly, you’ll be able to travel within a couple months.

One of the most common questions I get is about flying after knee replacement surgery.  People want to plan travel after TKR surgery and aren’t sure about the length of time before they can travel and fly.

Maybe they want to attend a wedding, visit family, or just go on vacation.  In each case, you’ll need to be careful to follow your doctor’s advice and do your best to work hard with physical therapy after surgery.

If you’re in good shape going into surgery, and if the surgery goes well, you should be able to fly within 10 weeks of surgery.  In this article, I’ll share my experience flying 10 weeks after undergoing a total knee replacement.

I took precautions (and got lucky) when scheduling my flight and reserving my seat. These included

Standing for long periods was always difficult as I always put the majority of my weight on my good leg. I felt much better moving even though each step caused some pain.

My first flight post-TKR surgery turned out to be a pleasant experience and I’ll share some tips that should make your flight more comfortable after knee surgery.

What My Doctor Told Me About Flying After Knee Replacement 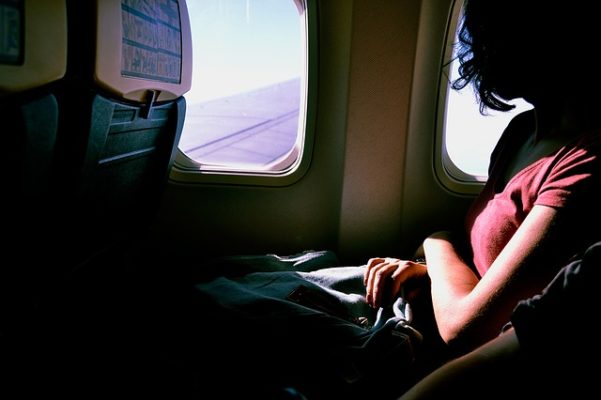 My wife had planned a cruise a year before my surgery so when I made the decision to have the surgery I was concerned if I should wait until after our cruise.

I made a point to ask my doctor about the length of time I’d need before I could fly.

My doctor assured me that I would have no trouble flying 10 weeks after surgery. I scheduled the surgery for May 23rd knowing my flight would be August 3rd.  This is what my knee looked like after 2 months – right before I departed on my flight.

After surgery, I was immediately worried because I was weak during the first two weeks. My recovery, however, improved rapidly.

By week 5 I felt confident I would be able to fly and enjoy the cruise.

My doctor advised me to:

Many people are concerned about blood clots when flying after surgery. My doctor said that it was not necessary to wear compression socks or to take any kind of special medication.

Worries I Had About Flying After Knee Replacement

After surgery, I was uncomfortable sitting in a chair for long periods of time. After sitting for 10 minutes or so I felt the need to elevate my leg (read more about my 2 weeks of intense physical therapy).

Early on I had concerns about being able to sit for the majority of a 2 hour and 45-minute plane flight. By week 8, I was able to sit in a chair for much longer periods of time.

Knowing that I’d be able to get up and walk made me feel confident that I could sit comfortably on the plane. I was flying on an airline that didn’t offer premium economy and I was worried about stretching my leg out.

The same airline didn’t allow me to pick a seat and I had to wait until 24 hours before my flight to get a boarding number. I was also concerned about waiting time in the airport, especially if our flight was delayed.

As it turned out the flight was delayed but frequent walks in the airport kept me out of the sitting position.

How I Made Flying After TKR A Success

Great news! When I received my boarding pass it was labeled TSA Pre-approved. No waiting in long lines and plus I did not have to remove my shoes.

The regular TSA lines were more than a half hour wait and I was able to zoom through the pre-approved line. I did set the security alarm off and was briefly rerouted to the full body scan where I told them I had just had TKR.

After the body scan, they used a wand around my knee and then sent me on my way (my article about airport security and knee replacement).  I was concerned about getting a bad seat so I went directly to the gate counter and explained that I had TKR 2 months ago and that this was my first flight since the surgery.

I was told that I could sit anywhere except in an exit row. I was fifth in line when we boarded and I chose a bulkhead right aisle seat in the first row near the bathroom. I could stretch out my leg and elevate it against the bulkhead and also stretch it out in the aisle.

I had to be careful to keep my foot out of the aisle when the other passengers were boarding and when the flight attendants went up and down the aisle. During the flight, I sat comfortably and took a walk the length of the plane every 45 minutes. I kept busy doing crossword puzzles and I did ankle pumps every ten minutes.

On the flight back I was also able to be in the early boarding group. All of the bulkhead seats were taken so I sat in the second row.

I discovered that I could stretch my leg out further under the seat in front of me easier than I could in the bulkhead seat. The only drawback was that I could not elevate my leg. I had a comfortable return flight even though we sat on the tarmac for an hour before taking off.

What I Wish I’d Done/Had For Flying After TKR

I had a good experience flying my first time after TKR. I was fortunate that I was able to fly comfortably after only 10 weeks post TKR.

If I would have had any complications or an unusually slow recovery I might not have had such a good experience or I may not have been able to fly at all. Plan ahead and make sure you have plenty of time to recover after surgery before traveling.

Choose an airline that offers extra legroom and certainly take advantage of the pre-boarding opportunity.

Select a seat that you will be comfortable in and try to be near the front of the airplane. Bring puzzles or a book to stay busy and remember to take frequent walks. You can do ankle pumps anywhere, in the airport while waiting and on the airplane too.

If you are a senior citizen there is a good chance you will be TSA pre-approved.

Don’t drink alcohol but drink plenty of water. Remember that your physical therapy and exercise will prepare you for a more comfortable flight.

Work hard after surgery and you will reap positive results. Thanks for reading my article. There are more articles to come.